I had a productive day yesterday.  In the morning I was visited by a doctor from Atos who was assessing me for my PIP claim.  I’ve been on indefinite DLA since 2005 and had the dreaded brown envelope telling me that was ending back in July and that I had to claim PIP from then on.

These assessments are generally negative and stressful, not only because the staff are either from Atos or Capita, who both have bad track records, but also because they focus on what you can’t do rather than what you can.

However, the lady who visited was lovely – warm and friendly and put me at ease within minutes.  The assessment went well I think, though I won’t know until I get the decision.

In the afternoon I visited Sheffield College.  Back in February I gained my level 1 certificate in BSL with Sense in Rotherham, but they don’t offer level 2.  I signed up at Sheffield and am looking forward to continuing to learn this fascinating language.  Like my first BSL tutor, the chap running this course is deaf and there will be no spoken language in class so this should be interesting. 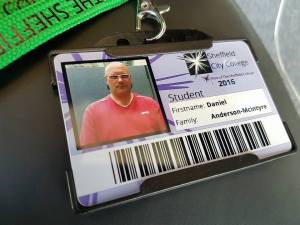 The train journey to Sheffield was straightforward and on arrival I snapped this picture on my phone: 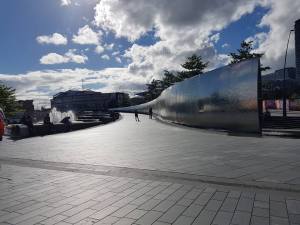 Which got a great response on Facebook.  I was surprised as it was just a snap and I couldn’t actually see properly when I took it as the sun was in my eyes.

The train journey back after registering at the college was eventful – I had to get off the train at Meadowhall, just one stop before Rotherham, because there was a train stuck at Rotherham with a passenger waiting for an ambulance.  This wasn’t a big issue as the next train to Rotherham arrived just a few minutes later so I was back on track.

It was nice to have had a day off work and to have managed to get stuff done without too many issues.

Back in March of this year (2016) my driving licence was revoked by the DVLA.  An appeal by me against this decision failed to overturn it.

This immediately prompted questions and comments from various people – work colleagues, family and friends – which I fended off with vague replies.  While vague these replies were also accurate.  My eyesight and cognitive abilities aren’t really up to the task of driving and may never be again, which is upsetting.

This decision in March was another step on a journey that began in July 2015 although really it could be said to have begun around 2012 sometime when I first mentioned that I was having memory problems to my then GP who laughed off the idea.  In July 2015 I approached my current GP and again mentioned my concerns about my memory.

My GP asked some questions and got me to draw a clock face.  I remember this clearly because at the time I felt absolutely ridiculous.  The upshot of this assessment was that I was referred to a memory clinic nearby, something that at the time I wasn’t aware of the existence of.  More tests and assessments were carried out, and for each one I had that ridiculous feeling.  Here I was an intelligent, articulate professional being asked what seemed stupid questions and not always being able to answer them.  I was asked to copy drawings of shapes and write simple sentences.  More clock faces were requested.

I now know these are pretty standard assessments of memory, reasoning and understanding.  I also had an MRI and CT scan of my head.  This whole process took a number of months and during this time I was finding I was struggling more and more with every day tasks both at work and at home, mainly caused by my memory problems but also I was finding that my ability to reason was declining as well as my decision making ability.

In October of 2015 I took a holiday.  Quite an epic road trip across Europe for 2 weeks.  I had an amazing time but in the back of my head was always the idea that this might be the last chance I had to do this – it had always been a dream of mine and now I’ve done it I would dearly love to do more of it but may never get the opportunity again.

I also around the same time started re-doing my BSL level 1 with Sense in Rotherham and in February 2016 managed to pass the last of 3 exams to gain the level 1 qualification, battling against my memory all the way.

Also in February 2016 as a result of all the assessments and scans I was diagnosed with young onset Alzheimer’s disease.  My brain is destroying itself piece by piece.  The rate of progression cannot be known but progress it will, taking more and more of me away as it does so.

This was the reason for my being taken off the road.  I had noticed, right from early stages, that I could set off somewhere and then forget either where I was going or how to get there.  Sometimes both.

I now seem to inhabit a life that I don’t always recognise.  I get confused easily and struggle to carry out simple tasks.  Some days I can cook from scratch a dinner for several people and then others I can’t manage to warm something up for myself.

I rely on habits and routines in order to make sure I remember to do simple things like locking up when I leave home or getting my lunch ready for work, taking my medication etc.  Mostly this works but sometimes it still falls down.  If for some reason I don’t do things in the right order then things are missed.

Part of my every day life is work.  Again my memory issues have a big impact here when I can’t remember how to carry out certain procedures, so look at the knowledge base we have but then another issue kicks in – the one where I struggle to follow sequences of instructions.  It can take me several read-throughs just for one instruction to sink in and sometimes it never does and I have to ask for help from a colleague.

So this is the fight that isn’t.  In the past I’ve fought cancer and won.  Twice.  This isn’t a fight though.  There’s nothing I can fight against, nothing I can win.  This is just going to take and take and take until there’s nothing left.  Some days I already feel like an empty shell, just going through the motions using my routines and habits to get through the day.  And this is still early stages yet.

What’s really scary is that this is just the tip of the iceberg.  I’m going to decline.  I may over time do or say more and more things that don’t seem to make sense to anyone else.  The information I’ve read  tells me that when this happens there will have been a reason that I did or said whatever at the time but that I often won’t be able to remember what that reason was.

For the time being I still have my long term memories.  The old stuff is still there.  But my short term memory is shot to hell.  Even when prompted I can’t always remember recent events and conversations are out more or less as soon as they’ve happened. Learning new things, taking new information on board, is difficult if not impossible.

And it’s so goddamn scary.